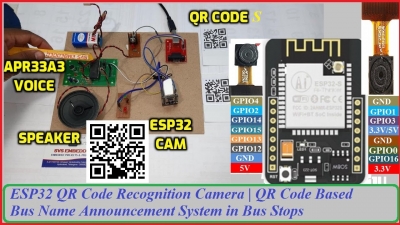 We Can Develop U R Own Thought’s Also
Send me a mail to
info@svsembedded.com, svskits@gmail.com


We will do the projects on general purpose
PCB boards only.
As per student requirement
We will use Printed circuit boards.

After receiving the kit
We will guide the students --- on

We will be providing the following details on CD / DVD

A bus detection system using QR CODE technology that aims to ease the traveling and movement of blind people. The proposed system consists of two detection subsystems; one on the buses and the other on the bus stations. Each visually impaired individual faces a unique and different set of challenges based on their specific level of vision. QR CODE has the potential to be a useful aid with further standardization of QR CODE and improvement of current ESP32-CAM readers. In the bus detection subsystem, the nearby stations will be easily detected and then announced through a voice message inside the bus. Moreover, any existing blind person in the surrounding area of the station will be detected by the bus subsystem to alert the bus driver about the number of blind persons. In the bus station subsystem, the arriving buses will be detected and then announced in the station in order to alert the blind people.
Keywords: QR CODE; blind; detection

Copyright 2016 by Unitechworld.in. All rights Reserved
Back Top